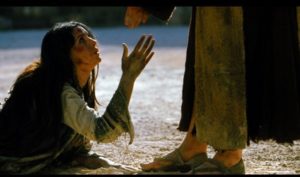 Will You Touch Him?

Now a woman, having a flow of blood for twelve years, who had spent all her livelihood on physicians and could not be healed by any, came from behind and touched the border of His garment. And immediately her flow of blood stopped.” Luke 8:43-45

The woman in the above verse had come to the realization that none of her natural resources could find a cure for her physical needs. At this point, she would have been totally exhausted and every hope would have been drained from her.

According to the Levitical law, women who were ceremonially unclean had to be separated from the public. Having suffered for 12 years, this woman would have felt much pain and rejection in being separated from others for so many years.

However, when she heard that the Messiah was able to make the blind eyes see and the deaf ears hear, her hope rose. Even though the crowd that surrounded the Lord made it difficult for her to get near Him, and even though she knew that she was unclean and was forbidden to be in the presence of others, she was aware of who Jesus was. She understood the love and the grace of the Lord and she was willing to surpass all her cultural barriers to reach out and grasp just the edge of His garment. That was the moment that she had waited for all her life; that very moment when she felt life flow into her body and her issue of blood ceased instantaneously. At that moment, all her years of suffering ceased and became something of the past.

Some of us are in the same situation as the woman. We have been drained both physically and emotionally as we have toiled for years and seen no life. Let our faith not waver. Let us understand that He is a God of great love and measureless grace. If we come to Him with the same faith as this woman and hold on to His garment, life will flow into every impossible situation.

Help me to persist and believe that it is given to me when I ask You in prayer. Today I believe that I have already received and rejoice in You. Amen.

God bless you,
Theo and Manju